Years ago we used to play a game at crops where we didn’t know anyone. It was a little spin-off of the radio programme Desert Island Discs, and the idea was that given a set amount of time, you had to meet three new people in the crop room and discover what book, album and luxury item they would hope to have with them if they were stuck on…a desert island. I always found you learned just as much from whether people could choose their items easily as what they chose—for some there is one book that comes to mind straight away, for others it is a chore to choose from a selection and still others wonder if they are saying the right book to make a good first impression. Everyone squirms a little and in the end it was usually good fun. Though on looking up Desert Island Discs, it does appear that the BBC have to pay royalties to the copyright holder to keep the show going, so if I now receive an invoice in the mail, I won’t be surprised.

What I have come to learn is that actually I would be far, far too dreadfully stressed out to enjoy the first few days on a desert island. It’s far too likely that I will have forgotten my book, my album and my luxury item in a taxi somewhere along the journey. I’m starting to think I might need to walk around with them stapled to myself as a precaution, but I think it would interfere too much with deciding what to wear every day. Seeing as I have slept in a tent exactly one night of my life and I was not so successful with the sleeping as I was with the shivering. I was also pretty good at the hearing every single little sound. And frankly, the wondering if we would be attacked by puffins. So really, my chances of unwinding on a desert island are quite slim, considering I will be listening for polar bears, getting a sun burn and convinced that if I shut one eye, it will be pecked at by a sea gull. 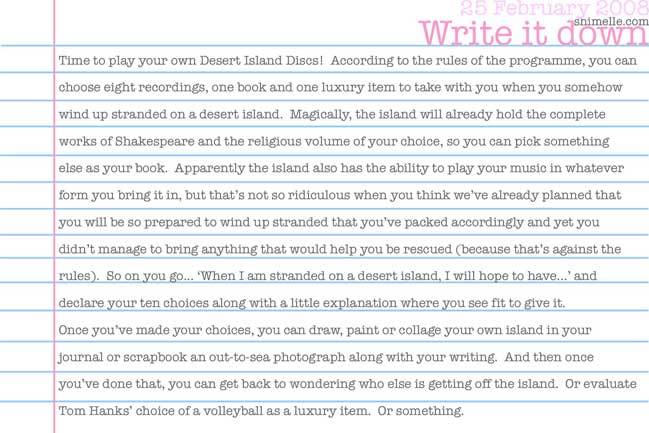 That doesn’t stop me from thinking that John Malkovich’s choices are essentially a perfect episode.

2 Comments for Planning for travel