You know how I kept saying there was news about CHA (the big trade show for the craft industry, which is just a week away) but I couldn’t explain just yet? I think this might just explain it. This weekend I got to hold these in my actual hands and get all giddy because I designed them. Yep—that little set of five stamps is my own little collection from Banana Frog, and those five will be joined by a bunch more stamps plus Bev and I in booth 324 at CHA. That’s the new exhibitors section because it’s the big American launch for Banana Frog, and I must admit I am quite excited. I know it’s just five little sets but it’s a big deal for me and I hope someone out there likes them. So that’s the explaining, pretty much. And since this is the week before CHA, you should now go to your favourite scrapbook store and tell them you want to buy these stamps! Well…it can’t hurt to ask, right? I’ll see if I can show you a few little peeks at the actual designs as we go this week…I’m sure you’ll be sick of me using them soon enough! Never fear, we’ll get back to the journaling now. This exercise is short enough that it can fit in a little journaling box or you can extend it for lines and lines. It’s one that works well with a photo in mind, so it’s quick from rough draft in your notebook to final copy in your scrapbook. And give you a chance at winning one of those kid versus adult game shows too. When I drafted out my ideas for twenty-nine journaling prompts, I didn’t intend to make them into an English lesson. Really I didn’t. I promise. But sometimes I found it just happened that way. So today we’re writing with prepositions. But it’s so much easier than that sounds, okay? It’s all just words. And in fact, prepositions are some of the easiest words to use—it’s just that sometime after the seventh grade we forget that they have a special name. That’s all. 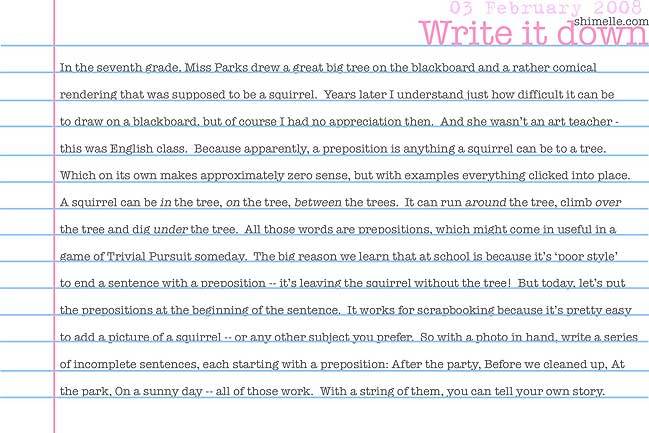 Oh come on, you knew there would be at least one cupcake. There just might be several.

20 Comments for Parts of speech