The Important Pages :: a scrapbook page to capture a childhood memory 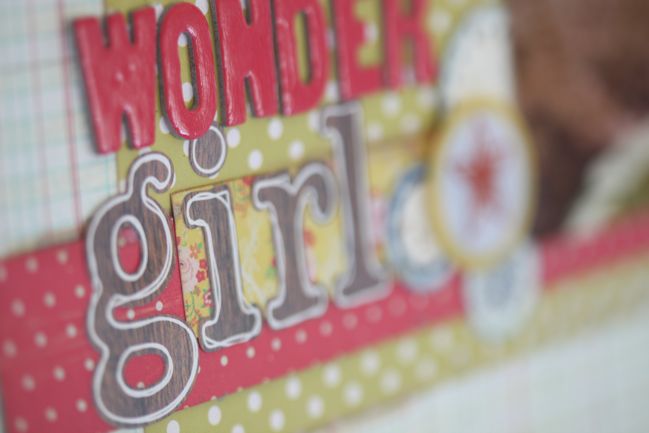 Although I’ve never been the type of scrapbooker who could focus and work through twenty pages at a crop (I’m afraid I spend way too much time talking and snacking to make that happen!) I would still consider myself pretty prolific. Prolific scrapping combined with fifteen years of scrapbooking makes for a great deal of pages and a great deal of albums. I have nearly seventy 12×12 albums, and I treasure them – I don’t mind how much space they take up at all, and they live in my craft space, so no one else really gets to comment on the space they take up. But I would never feel like there should be some sort of obligation for anyone to take seventy albums when my time here is up, much less the many more I hope to make in the future! It’s something I’ve discussed with a few scrappers over the past year or so, when some crafters said this was the biggest reason they were walking away from the hobby: that the albums had become a burden.

Please forgive the slightly morbid tone of this thought, but in this house, we’ve discussed the scenario of what I would want to happen, and my answer was that I would just appreciate it if, whenever the timing felt right, that The Boy and whomever else felt compelled to do so would flip through my albums and have one look through everything (which I realise is asking a lot when it’s so many books) and then select whatever they feel are the highlights they want to keep and to feel zero guilt in letting the rest go. I imagine that would take things down to one or two albums of the absolute highlights, and we’ve also talked about a couple albums that might stay intact, like our wedding album and the books of our epic backpacking trip, because these really focus on telling our story in a different way from the page-by-page randomness of any given annual album.

Something that came up in this conversation was but which pages would you feel were the most important? and that was something I hadn’t really devoted much thought to in the past. With a bit of distance from the conversation, it started to feel like a real challenge for this year of focusing on why I scrapbook, so my goal is to identify about fifty Important Pages that would create some sort of story of my life. I haven’t sat down and figured out all fifty at once. That means they may not go in any sort of order as I write about them. Some are relatively new, some are old, some will truly document the evolution of my creative style, and I’m fine with all that. And so, on to the first page I’ve picked to get that capital letter treatment: one of The Important Pages. 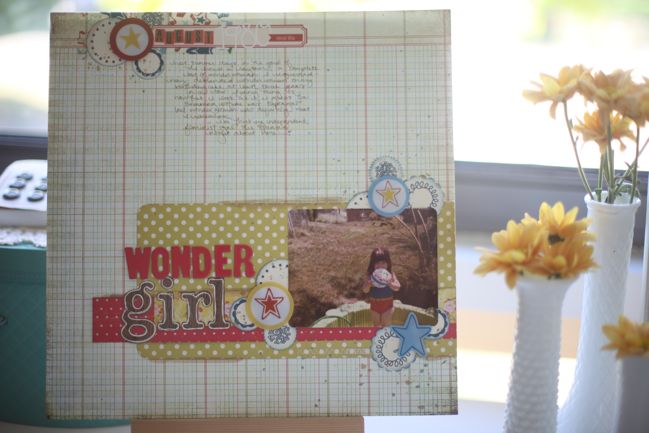 Originally created in May 2011 and shared in this post that marked my first effort at raising funds for girls through the charity Plan. I think that gives this page two levels of meaning to my heart – one about the photo and the memory itself and another about what making the page symbolised and all the thoughts that went through my mind while making it that were so far removed from the memory of exactly what was in that photo, and the sheer thrill of that first big donation I was able to make combined with knowing that I’ve continued to be able to work for that cause through a love of craft. But it’s the photo and the memories that I want to focus on here.

This photo was taken, as far as I know, in the back yard of the first house I remember. I believe there was an apartment when I was a teeny baby, if I’ve pieced the stories together correctly, but by the time I was old enough to remember the visuals, we lived here, and there was grass in the front and the back, and the back yard was fenced to keep the dogs in, in theory, though there was one who had a habit of following us to the post office. There was at least one big whisky barrel style dog house that I loved to climb until the day I took a tumble from the top. I still have a funny white scar on my knee from that day. I have no idea if the fall actually made me stop climbing, and I’m inclined to believe it didn’t, as in elementary school I had developed an obsession with another female super hero – She-Ra, Princess of Power – and would climb to the top of the jungle gym to fly off the top, if only I believed I could. Of course, gravity had other thoughts, and I would go plummeting to the ground every time, only to dust myself off and think that I would have to believe harder the next time. It is seriously a miracle that I didn’t break every bone in my body during recess that year.

But back to the time of this exact photo… I remember what I think is this particular summer that the temperatures soared and the paddling pool actually melted past a point of all recognition. I remember being this age and loving to eat Ruffles potato chips from the bag, having meals on an Incredible Hulk melamine plate, and watching Hart to Hart and the Muppet Show in the living room from a tiny brown arm chair. My Anglophile stage wouldn’t begin for another few years, so these early memories are some of the things I truly remember in an American nomenclature, which would slowly fade away over the years.

Then there is also how this page starts to capture the influence of superhero culture and how I grew up. There is a little confusion you might pick up between the photo and the title here: that swimming attire is most certainly Supergirl influenced, not Wonder Woman. I promise it all makes sense in my head: too little to read at this time, so my superhero influences came almost entirely from TV. I watched Wonder Woman and thought she was amazing. Again, a female superhero who could fly! (Seriously, I am still searching eBay for an invisible plane, because that would just be useful, assuming it stays in good repair.) I didn’t really know who Supergirl was until the movie came out and that was a few years after this picture. To my untrained eye, this outfit was very much Wonder Woman and I don’t remember anyone correcting me. If they did, I might have been a brat about it and told them they were wrong. I’m not too sure, but I can believe it. I remember more correcting adults as a child than I really care to admit, but thankfully there weren’t too many people in my little world who believed in the ‘children should be seen and not heard’ school of thought, so I managed to survive to adulthood unscathed, and probably learned more about keeping my mouth shut when one can’t win an argument during university lectures with those kinds of professors who have been teaching the same class every term for longer than you’ve been alive. The Wonder Woman obsession stayed around for a long time, and there is another page in my album that documents how I only wanted a Wonder Woman birthday cake at least three years running, despite my wonderfully-meaning grandmother thinking I would surely be bored of that by now and want something else. I think she still has the cake pan. If I ever end up in Kansas around my birthday again, well… it would never surprise me. And I would probably cry a lot of happy tears about it.

(By the way, when Supergirl did finally hit my radar, the fact that her first name was the same as my cousin may have made me think she was the coolest person on the planet. Frankly we should have been invincible and able to leap tall buildings, but we mostly have epic skills in eating black olives off our fingers and finishing off the potatoes at family gathering, and let me tell you, I do not think these are super powers that should be underestimated, because they are ridiculously rewarding. If you disagree, you are eating the wrong potatoes.)

Even the silly ball in this photo reminds me of other things, and it’s just one of those dime a dozen bouncing balls that would be in a big cage at the end of the aisle at K-Mart or TG&Y. (I could probably also write an entire paragraph on why I miss TG&Y, which was the best bargain hunt of a store in my youth, but I fear it is really one of those ‘you had to be there’ things and there isn’t a true way to explain an appreciation of the five and dime.) From this photo, I clearly had at least one as a little girl. But as a teenager, there was another – with the same exact print and from another metal cage – that my high school speech team carried to forensics tournaments, and at the end of each weekend we would take a Sharpie to the ball and record any wins from the week. The rest of the time it served as distraction during the down time of a tournament, waiting for postings and results, and had a hand in a few warm up games we would do to start the day. More than once, I had to cram it in my locker quickly when someone would throw it to me in the hall from the classroom. I often skated a very fine line with being a bit too ‘lively in the halls’ when speech team stuff was concerned and there was one member of staff who always seemed to turn up at just the moment. We never really did get along. But I am thankful for the teacher who actually led that team and how he would give those little troubles a bit of a wink and move on, because when I was my most disheartened with all things academic and truly wanted to throw in the towel, he would throw me something that would keep me there. He also made me fall in love with Shakespeare after another teacher had made me truly believe that old texts were the most lifeless words thrown together in a blender of boring. After he made me perform a few monologues, I returned to the dusty copy of the complete works on my shelf at home and I read them all, in order, usually in whispers in the middle of the night, which is all a little Dead Poets Society without the boarding school, but still: that was the truth, and I get all that rushing back just from that silly bouncy ball in the back yard, aged three.

And all that makes this a pretty important page indeed.

Admittedly, I feel this series of posts is going to lead to a stack of journaling that isn’t included in my album. I’m thinking I may add these posts to my albums next to the highlighted pages in a smaller page protector (like 6×12), but if I don’t get that bit of added writing into my albums, I am happy that it at least exists here.


Next post: Getting Personal:: A Scrapbook Page by Kirsty Smith
Previous post: January 2014 :: A Month of Winter Warmth and Scrapbooking Ideas

20 Comments for The Important Pages :: a scrapbook page to capture a childhood memory