On the last day of every term, I had such a routine that if a student was absent, I would tease them no end for skipping school in order to miss their self-assessment day. There were only about two that squirmed so much that I think they were actually guilty of just that.

It’s one of those things that goes in and out of fashion in the classroom. Everything in education goes in and out of fashion. The walls should be filled with resources, the walls should be filled with students’ work, the walls should be white to allow for concentration, and back to the beginning. We should teach rote grammar, we should forget grammar, and back and forth. Let’s start a committee to improve the learning for boys, now wait, ditch that, we need to focus on the girls. It all goes round and round and round and you just go with the flow. But sometimes the things that are new and in fashion (or should we say on trend these days?) sound so ridiculous you really do scream.

Like the fact that a big chunk of schools for the past several years have had special committees for…get this…thinking skills.

Yes. Apparently before this became the trend students didn’t think in lessons. No, of course that’s not it at all. (And in fact, if you really want to know, you can read about it here.) It’s just a new name for something that was there in places but needed more attention. But as a lover of words, I find it funny that such educated educators come up with names for things that are pretty daft. Because I do think the name gives the impression that we needed to stop everything we were doing because NO ONE IS THINKING!!! (Best imagined in cartoony stereotyped teacher voice after said cartoon has had far too much coffee in the staffroom because she thought she was drinking decaf and the prefects thought it would be funny to mess with her head. Little did they know it could actually explode.) Anyway, I have digressed.

Whether I like the name or the attention drawn to it, I don’t think we learn at our best if we just read, see and hear new stuff every day. But I don’t know many people who benefit all that much from multiple choice review worksheets either, especially if we’re talking about long-term retention and understanding. So I always asked the students to review things on their terms. Which may tick a lot of boxes for that committee on thinking skills, but it also takes a lot of trial and error.

I taught at my last school for seven years and the first year could have been a reality TV show. I had one class that was lovely, but I only saw them for two hours each week. I had one class that were incredibly clever but also incredibly mischievous and also didn’t fit in my classroom if no one was home sick. There were a few classes that were mostly passable but had two or three key characters that could rip me to shreds in a matter of minutes. And then there was 8C2. Oh. My. Goodness. Thirty-two twelve and thirteen year olds who were deemed ‘somewhere in the middle’. A strange arrangement that year meant we had one class for all the over-achievers and one class for kids who couldn’t make it from morning bell to lunch time without being sent home for fighting. So if you didn’t fit in either of those groups? Welcome to my classroom. Somehow I survive the first five weeks with them (it was a close call) and I sit down with my mentor teacher to discuss end of term reviews.

I was still high on education theory and textbooks and professional development days, so I was convinced it would work just like it was supposed to. I would put a few sentence starters on the board and they would magically compose a well though-out letter to me, with a paragraph each to cover a brief summary of what they learned this term, their highlights and lowpoints for the topics and assignments we completed, an evaluation of their time management and study habits and a self-assessment including what grade they thought they deserved, why they thought they deserved it, their personal target for the next term and three steps to making that a success. All signed yours faithfully, the wonderfully academic and responsible students of 8C2.

Instead, most of them discovered they didn’t know my name and proceeded to draw monsters from the deep lagoon or unicorns in their exercise books, depending on their gender. A few figured that would be a waste of paper and drew them on the desk, the wall or the person next to them instead. To save the trees, clearly. 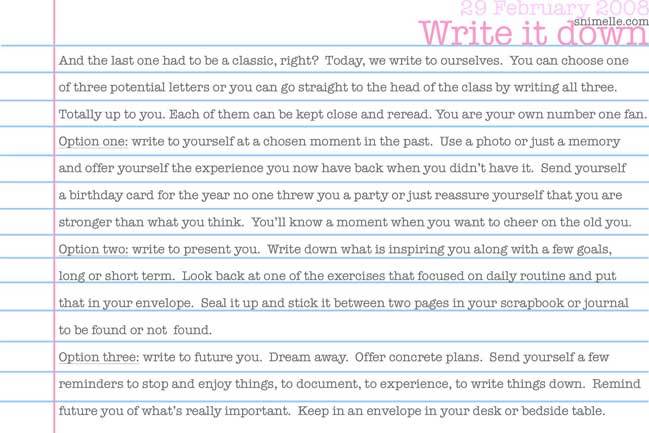 For that entire year, I kept an old letter in my desk, where a friend who I haven’t heard from in a dozen years had written some perfectly charming message inside a get well card. You know when you expect the card will just have a signature and then you almost have to press the nurse call button because frankly you may have a heart attack after you read what is actually there? One of those. I have no idea where it is now, but it was the only thing that got me through lessons of monsters from the deep for an entire year. And you know what? That thing they say about the second year being so much easier? It was actually true. Somewhere along the line, I did learn how to get them to produce real letters and not sea creatures with deadly weapons. I wish I could say it was an epiphany. Really, it was more like coming up for air.

And that, my friends, is card twenty-nine, so that’s a wrap with Write it Down for now! Thank you so much for checking in this month…February was definitely a roller coaster here but it ended on a nice point with a whole heap of wonderful potential for March. For starters, I hope you’ll check out something new I’m quite thrilled to be doing—Work Out Wednesdays is a new weekly feature at the Frog Blog, giving one set of stamps a workout each week. The card above is a little peek at this week’s workout. So please stop by and check it out.

And then some of you actually be waiting for the very next post right here. Supercool. Stay tuned—it’ll be up before you know it!