paper: Grey can be beautiful too | pretty paper. true stories. {and scrapbooking classes with cupcakes.}

Grey can be beautiful too {And now my plan is to abandon my own pictures entirely, for just a few days. Hurrah for Flickr and its favourites system. Genius.}

According to many experts and also me, there are two things at which we all excel in England. Queuing and talking about the weather. I’ve already mentioned the former enough to cause some confusion (standing in a line…that’s what it means. And we do it even if we don’t know what the line is for. We just gravitate toward it and bing! There we are in orderly fashion. And don’t get me started on queue-jumpers.) and this guy is on to so many levels of the London queue. So let’s talk about the weather.

When I first arrived in England, people apologised for the weather. I arrived in the middle of the summer but it was still grey and cold enough to need a jacket. (If you ever travel here, you will find no need to delve into your jetlagged brain for real conversation. The first twenty-four hours of conversation will easily be filled with ‘How was your flight?’ and ‘Sorry about the weather’. You’ll be fine.) Within a few days, the conversation had shifted to ‘What’s the weather like where you’re from?’ and at the time I didn’t think there was anything particularly noteworthy about the weather back home, except for the legendary tornado. Having been here a while, now I answer that same question with ‘extreme’. The winters there are cold. Really cold. With ice. The summers are hot. Really hot. So hot there are days you can’t face going outside at all. And then there’s the wind. Lots and lots of wind. Since that’s what happens when there isn’t a hill or a tree in sight to break the breeze. So yep, pretty extreme.

Here we have the mild. Winter feels cold but in this part of the country it rarely freezes and we haven’t seen so much as a flake of snow this year. Last summer lasted approximately 3.4 days. And in between we have chilly and not chilly, grey and not grey. Rainy and not rainy.

But I think that’s perfect.

I do find I yearn for the change of seasons more now, but I don’t know if that’s due to the location or the growing-up factor. Right now it is totally due to being so close to a park that I adore and wanting it to be just warm enough that I can sit there and work for hours without it being too cold or too busy. Soon.

So yes, clearly this is something we do with ease here: talking about the weather. I’ll try to stifle myself now and give you today’s card: 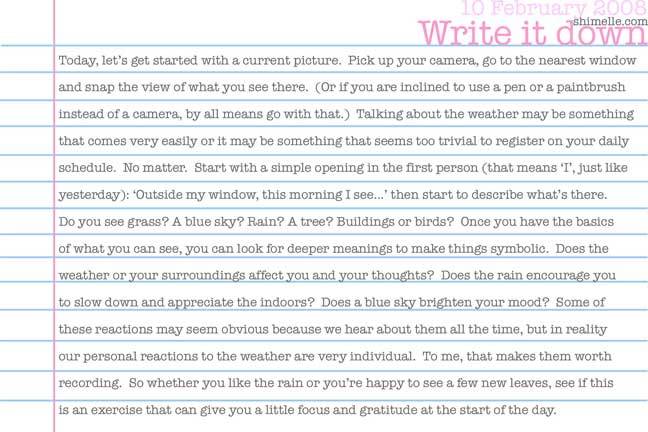 Of course, there is much to be said for morning window photos to be left alone, like the beauty of this. But part of me knows that my British side would love to write a story narrating all those photos, despite never knowing either of the two photographers. But perhaps that is a little much for one exercise.

2 Comments for Grey can be beautiful too